My journey with dogs started in childhood and since 1989 Labradors has always been part of my family. My passion for this breed has evolved into breeding and showing Labradors as I wanted to share the joy that this amazing breed brings. This is my story …

It started with a little Daxie called Stella

Around my 8th birthday my parents surprised me with a cute, fat, black and brown cross-breed Dachshund puppy. We called her Sella and she was a true friend and playmate for the next 11 years of my life. I taught her all sorts of tricks and games, put her in a baby pram and wheeled her around the block; we had so much fun together! Sella was by my side through my childhood and teenage years. She taught me the value of a loyal canine friend; therefore I will always treasure the happy memories I have of her.

Many years later, in 1989, after marriage and the birth of my 3rd child we wanted to get a family-dog. A friend told me that parents with young children need not look any further than a Labrador! Our minds were made up, and the big search for a Labrador puppy started. We found a yellow male Labrador pup, and we called him Amadeus (after Mozart, the composer, a natural choice for me as I am a musician and music teacher!). The fact that he chased the chickens was not held against Amadeus because he was such an amazing family pet. My eldest daughter was a tiny toddler when she regularly used him as a stepping stone: He was always patient and slept undisturbed while she stood on him whenever she wanted to reach for something on the counter! I was so amazed by the Labrador temperament that I knew I was completely hooked on the Labrador breed. They have everything to offer that people most adore in dogs. In respect and appreciation for what Amadeus has taught me about the remarkable values of a true Labrador, I honored his memory by naming my breeding kennel after him – Amadeuze Labradors!

After Amadeus came another Labrador, a yellow bitch by the name of Nandy. She lived to the age of 13 years, and we loved her dearly. A few years later we got another yellow male and female, our first KUSA registered Labradors. I bred 2 yellow litters from them and the pups went to pet homes. Unfortunately some of these puppies showed early signs of hip-dysplasia. Even though I enjoyed the breeding aspect very much, I promised myself that I will NEVER breed another litter if I cannot be sure of healthy, sound quality pups.

On to showing off our Labs

In 2008 I start searching for a quality bitch from a reputable breeder to breed from. The bitch, by the name of Poplap, came at the end of that year from a top-quality breeding done by Mr Daniel Kritzinger (Dennegeur Labradors). He said I can only have her if I promised to show her as she is of show quality. At that stage I didn’t have a clue about how to show a dog, but I really wanted that puppy so badly I promised to show her without realizing what effect that promise will have on the next few years of my life!

It was almost one year later, at the Goldfields Kennel Club Championship Show, when I showed Poplap for the first time- my biggest motivation being that I promised to show her, as well as the fear that Daniel might take her back if I don’t! Poplap, then aged 11 months, was taken into the ring without any ring craft training prior to the show (neither me nor her!), without even a proper show lead, and with a handler (that would be me!) who didn’t have a clue what she is supposed to do (or not do!) Nevertheless Poplap won the bitch CC, Best Puppy (Breed) as well as Best Puppy in the (Gundog) Group under Mr Maurice Baker. It was probably a matter of “beginners luck” but it was also a turning point in my life: on that day the fun of showing dogs seriously started! Showing dogs whenever possible has become a way of spending quality time not only with the dogs but also with new friends I made through dog shows. Since that day in August 2009 when Poplap made her debut in the show ring I succeeded in making up more than 10 Labradors as SA show (breed) champions, and trust that the youngsters will follow suit. Sadly Poplap passed over the Rainbow bridge in August 2015, at the age of almost 7 years, due to having kidney cancer for the last year of her lifetime.

Its all in the social

I also enjoy reading, learning and educating myself about the Labrador breed as well as making contact with other Labrador lovers around the world. The internet and Facebook became valuable aids in this regard and in 2009 I found a black male puppy, bred from top quality bloodlines from Scandinavia and Canada, by Mrs Monica Jarl Winnberg at Seabirds Kennel in Sweden. The puppy was called Trotter (short for Globetrotter). He was a formidable dog in every way and made a tremendous impact on our lives, our hearts and our breeding kennel. Most of our current dogs are related to or offspring to Trotter. We sadly lost him shortly before his 9th birthday. A few years later I imported another high quality black male puppy, this time from France, bred by Miss Anne-Charlotte Dreyfus from kennel De L’Etang Balancet. During 2014 and 2015 I imported another 3 Labradors from Sweden, also from Seabirds Kennel. They are chocolate Maggie, yellow Amber and chocolate Oscar- he is from the same breeding as Maggie, only one year younger. A huge thank you to Mrs Monice Jarl Winnberg for sending us these lovely, super quality Labbies to us. 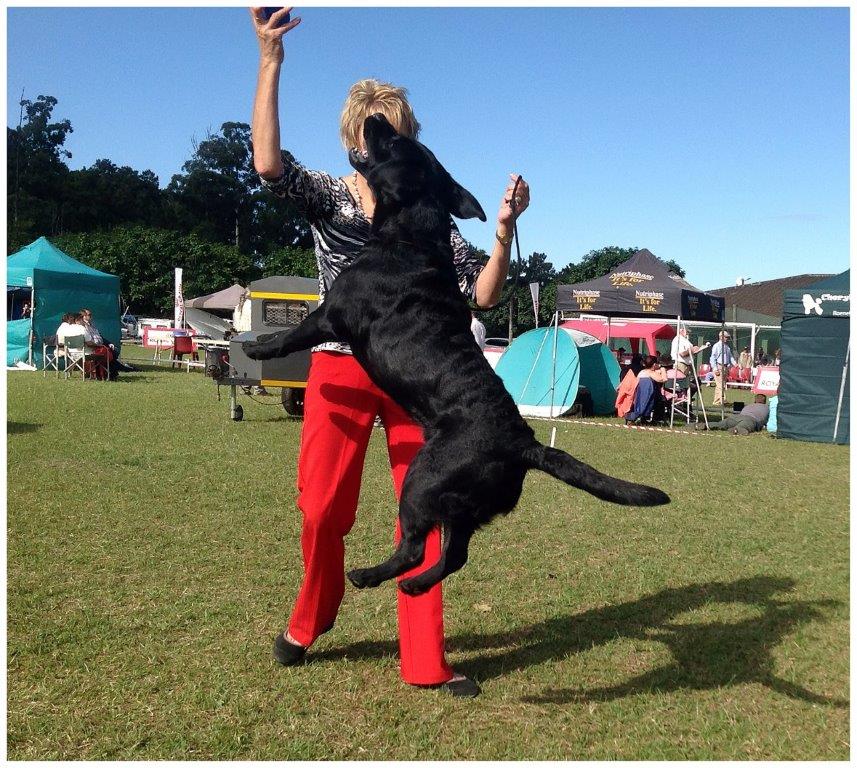 And don’t forget the Dachshunds…

The mini wired hair Dachshunds were my daughters’ choices as pets. The 2 cuties were bred by the late Gordon & Marie Steward. The mini Daxies were shown as well and Tinkle Bell soon also achieved championship status. Unfortunately we do not breed from the Daxies as they are family pets. Gigi completed the training to become a “Paws for People” therapy dog but, being a typical Daxie, she was found a bit too “vocal” and did not succeed in grading. Instead she and Tinkle Bell became dedicated, fearless and deadly hunters and they keep the premises clean of mice!

A Word of Thanks and Appreciation

Running a dog kennel and breeding litters of puppies are neither plain sailing nor glamorous.  In reality it is dedication, hard work and long hours all year round.  Family commitments, work related matters and dog shows sometimes take you away from home for a day or a few days.  Dogs require full time attention and care and if you happen to also have a litter of puppies, assistance is needed in making yourself available for other obligations.

Fortunately we are blessed with wonderful and loyal friends who share our passion for the dogs and puppies, and we would like to thank them sincerely for their invaluable contributions in many ways.